By Kesah Princely, In Buea

Presidents of some journalism associations in the South West region have urged US based Ambazonian activist, Eric Tataw to oversee the immediate and unconditional release of journalist Mary Namondo.

“We recall that Eric Tataw had demanded that journalists, teachers, landlords and members of the society preaching school resumption in the troubled North West and South West regions should be systematically stopped. We assume that the Non-State armed groups worked based on the instructions of activist Eric Tataw,” they stated.

As TWIF NEWS had earlier reported, Namondo was whisked off while on duty at the Bonakanda Community Radio station in Buea, on Tuesday September 3, 2019.

The leaders of the three journalism associations have called for her immediate release, “we call on Eric Tataw to ensure the unconditional and immediate release of our colleague, Journalist Mary Namondo.”

They also entreated both actors of the Anglophone armed conflict to respect the rights of journalists in carring out their duty — that of informing society on current happenings.

“This is not a plea to the government but to all those involved in the conflict, since freedom of movement, freedom of the press and information, are essential for all the peoples of the world to know what is happening in their environment,” they intimated.

Unconfirmed reports from The National Telegraph cliam Mary Namondo has been released, attributing it to Eric Tattaw’s intervention.

Sources in Bonakanda, including Mary Namondo’s mother have told TWIF NEWS that they have heard rumours of her release, but are yet to see the journalist.

This is not the first time journalists are being targeted by Ambazonian fighters. North West based Ambe Macmillian Awa was also kidnapped by separatists in Bamenda some months ago. Cameroon’s forces of law and order have also been accused of inappropriate behaviour towards journalists amidst the socio-political imbroglio in the two English speaking regions.

CMTV’s Pidgin-English newscaster, Samuel Wazizi is being heald incommunicado by Cameroon’s security forces for allegedly having links with Pro-independence fighters — claims which he has denied.

The three association heads have urged the government to engage in a dialogue to resolve the ongoing deadly conflict that has claimed close to 2000 lives. 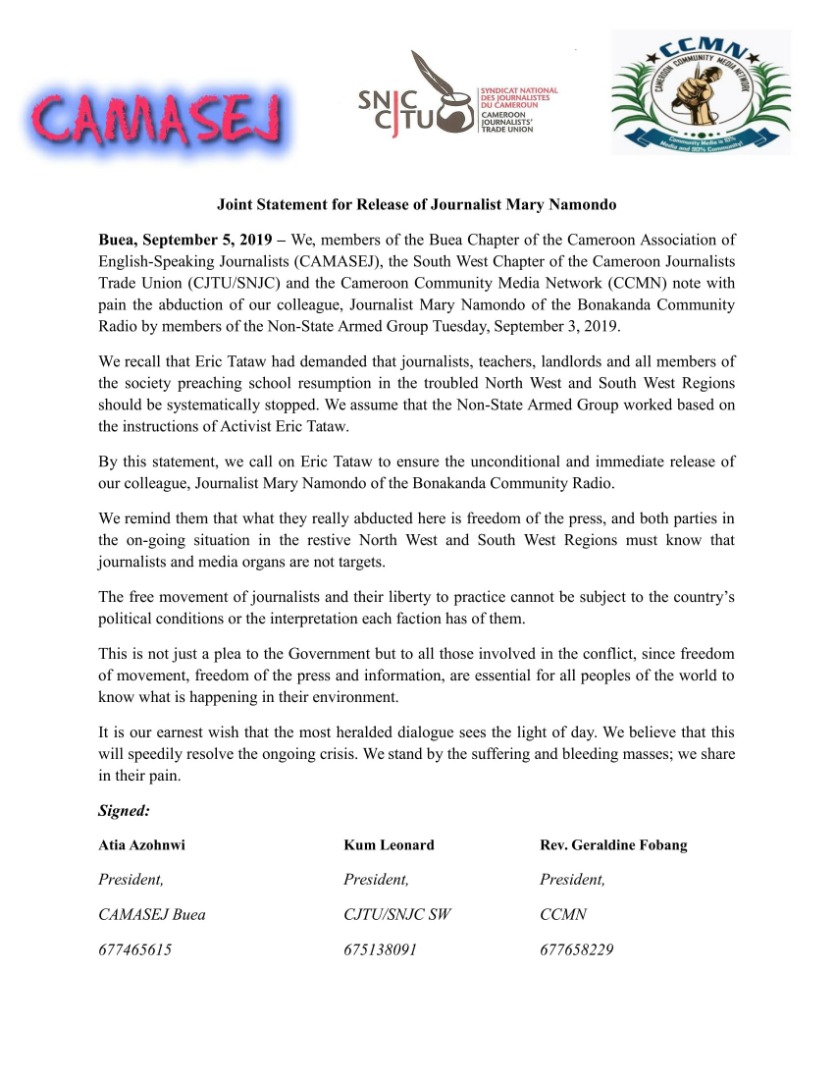